Wicked Witches: An Anthology by the New England Horror Writers 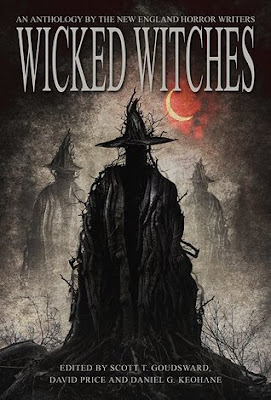 Description
New England has a rich, dark history with the supernatural. From this region many writers of dark fiction have fueled their stories. One chapter in history has been the stuff of legends and nightmares: the Witch. Look to ancient mythology or your next door neighbor and you will find them, practicing arts both Dark and Light. The New England Horror Writers proudly present a new anthology which pays tribute to those whose ancestors were accused, hung, pressed, drowned, or burned at the stake. Enter these pages, wander the hard roads of Colonial America or modern corporate boardrooms, to face the Witch. Wicked Witches, fiction from New England’s most talented writers: G.D. Dearborn, Barry Lee Dejasu, Peter N. Dudar, Jeremy Flagg, Joshua Goudreau, Catherine Grant, Jan Kozlowski, Patrick Lacey, Izzy Lee, Nick Manzolillo, John McIlveen, Paul McMahon, James A. Moore, Errick A. Nunnally, Ogmios, Suzanne Reynolds-Alpert, Doug Rinaldi, Rob Smales, Morgan Sylvia, K.H. Vaughan, Morven Westfield and Trisha J. Wooldridge Introduction by Penny Dreadful; Cover art by Mikio Murakami

As a horror fan and long time resident of New England I have always been interested in stories about witches so this gorgeous cover immediately caught my eye. Beyond this cover, Wicked Witches is just plain "wicked good" story telling. The tales that cast the strongest spell on me were as follows..
"In Agatha Craggins' Defense by John McIlveen -
To say Agatha was unattractive was a gross understatement but does that make her a wicked witch just because the townsfolk point and stare and gossip about her? You will have to read to find out.
"The Witch's Apprentice" by Morven Westfield - Callie has had enough of her annoying noisy neighbor and decides to use witchcraft to get some peace and quiet.
"Going Home" by James A Moore - A witch returns to Salem but are her intentions good or evil?
"White Witch" by Catherine Grant -When a baby is born the "wrong color" it will take the power of a mother's love and some help from voodoo to protect her.
"Baskets" by Paul McMahon- When Tommy shows up at Grandma Shawl's house uninvited and unwelcome they're both going to be sorry.
"Portrait of an Old Woman with Crows" by Peter N. Dudar
When a woman begins painting a portrait without asking the subject for permission to use her likeness the results are horrifying. This one had me almost afraid to turn the pages.
"To Dance The Witches Circle Again" by Morgan Sylvia- This story was amazing! Trouble is brewing  as more and more witches are arrested and put to death.
"Another Plane" by Patrick Lacey-
Matt is fed up with his wife Kelly's interest in witchcraft. It's not real. Or is it?
"The Jatinga Effect" by Doug Rinaldi-
Edson is having a really bad day at work, and so are his coworkers thanks to a curse.

I would highly recommend this anthology to any fan of horror, dark fiction, or witches in general. All the stories were good, some were  spectacular.

I received a complimentary copy for review
Posted by Well Worth A Read at 4:06 PM