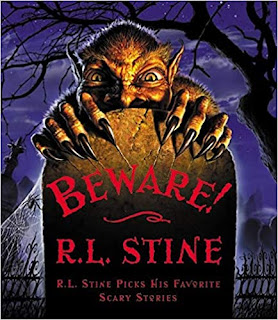 R.L. Stine has gathered a selection of all things scary, and even added two new tales of his own! Short stories, fables old and new, comics, and poems. It′s a spine-tingling collection of work by dozens of writers and artists who are famous for hair-raising fun.

Discover a ghastly secret in a retelling of the classic story "The Judge′s House," by Bram Stoker. Peek into a Christmas stocking that holds a shocking surprise in a Vault of Horror comic, "A Sock for Christmas." Meet an ice-cream man who will chill your blood in "Mister Ice Cold" by Gahan Wilson.

But first, visit an evil carnival in "The Black Ferris," by Ray Bradbury. R.L. Stine says that this story changed his life! Be sure to read all the introductions—because R.L. reveals why he picked these stories just for you, and why he finds them the creepiest ... the funniest ... the scariest! BEWARE!

I had actually bought this book for my son back when he was in middle school and it wasn't until years later when he was grown and packing up to go out on his own that I decided to read it before he took it away. I have always loved horror anthologies so some of these stories were familiar to me, I had previously read Bram Stoker and Ray Bradbury. The 2 stories by R.L. Stine were new to me,. I really enjoyed them and also the personal touch he added with the notes on why he chose each story. These are not just for kids, anyone who loves a good spooky story can enjoy these at any age.

Posted by Well Worth A Read at 1:26 PM No comments:

The Only Good Indians by Stephen Graham Jones 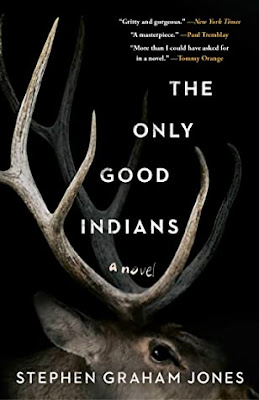 A tale of revenge, cultural identity, and the cost of breaking from tradition in this latest novel from the Jordan Peele of horror literature, Stephen Graham Jones.Seamlessly blending classic horror and a dramatic narrative with sharp social commentary, The Only Good Indians follows four American Indian men after a disturbing event from their youth puts them in a desperate struggle for their lives. Tracked by an entity bent on revenge, these childhood friends are helpless as the culture and traditions they left behind catch up to them in a violent, vengeful way.
I loved the first half of this book, and the theme of revenge.
Years ago, four Native Americans went hunting, and their lives were forever changed.

Has revenge manifested as a supernatural being? Or perhaps the weight of  living under this oppressive cloud of guilt  is so heavy that it has caused paranoia to set in. The guilt has certainly become a pervasive and tangible thing. Palpable, visible. inescapable to the end, and I loved it. I enjoyed the characters. flaws and all. I enjoyed the slow build up and the ever increasing creeping fear. However at about or right before the halfway mark there was what seemed to be the climax and then instead of ending it felt almost like the start of a different book. Slower, more drawn out, even draggy in parts. Especially for people like myself who don't care a thing about basketball. I think the story line, while compelling could have flowed a little better.
I received a complimentary copy for review.
Get a copy
About the author
Stephen Graham Jones is the author of fifteen novels and six collections. He really likes werewolves and slashers. Favorite novels change daily, but Valis and Love Medicine and Lonesome Dove and It and The Things They Carried are all usually up there somewhere. Stephen lives in Boulder, Colorado. It's a big change from the West Texas he grew up in. He's married with a couple kids, and probably one too many trucks.
Posted by Well Worth A Read at 2:59 PM No comments:

The Scavenger by Aidan Lucid 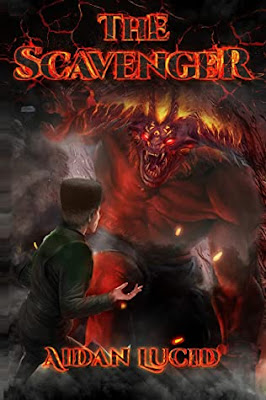 Just like Hopps Town, their humble home, Jessica Barlow, Jared Duval, and Adrian Cole are fostering dark secrets. Plagued by loss, cruelty and physical abuse, these friends are kindred spirits, bound by anguish and elusive dreams. They’re soon to find the key to change, but any happy future will demand they face a haunting past and brave a lethal present.

Deep in the forest on the outskirts of town, aging and nearly forgotten, there stands a well from another time. Happening upon this relic, Adrian goads his companions to join him in making a wish. Soon, difficult though it is to admit, their luckless lives do seem to shift. The only problem is, the changes aren’t at all as they’d imagined. Seemingly, they’ve only left the pan to face the fire.

Should they hope to both survive and thrive, they’ll need to pool their wits and draw on mystic inner-power. Solving Hopps Town’s greatest mystery now means life or death.

Three high school friends, Jared, Adrian, and Jessica, stumble upon an old well out in the woods and decide to make a wish. None of them actually take it seriously but that doesn't seem to matter as strange happenings seem to indicate their wishes have been answered by someone or something in that well. Jared has been bullied but suddenly has a popular boy coming to his defense. Adrian has a new girlfriend but also a secret admirer stalking him and poor Jessica who has been tormented by her abusive alcoholic mother suddenly finds she has turned into a June Cleaver type, a mom who cooks meals and hands out lunch money instead of insults and slaps seems too good to be true. I was both happy for them yet worried over what consequences these granted wishes would bring. Like the old saying goes be careful what you wish for, but in this case you need to be careful who it is doing the wish granting. This was a fun YA horror with a fast pace and not too much gore, just a lot of spooky fun, and a mystery to uncover.

Posted by Well Worth A Read at 8:16 AM No comments:

The Mind's Plague and Other Bites of Brutality by Morgan K. Tanner 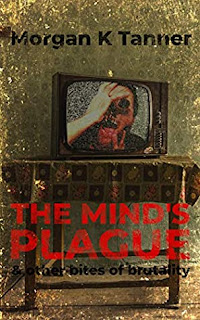 Three friends search for an infamous internet video of an urban legend with devastating consequences; a passionate drummer joins the band of his dreams, or perhaps his nightmares; a man tries to find fame in a world where the mundane call the shots; and a grieving father loses his grip on reality.

These ten stories delve into a world of darkness and suffering, where the terrors are more vivid than they may appear. Blood is spilt, minds are destroyed, as madness ultimately reigns victorious.
For a good time, read Morgan K Tanner. I spent the day taking a break from the world and enjoying these 10 short stories. Horror is my escape. It's how I relax and recharge and today my battery is full for having read The Mind's Plague and Other Bites of Brutality.
My favorites in this collection were the title story The Mind's Plague in which bored teenage friends enjoying an unexpected day off from school choose not to spend their time wisely. Even though it is set in the present digital age it was reminiscent of the 80s supernatural horror that I love so much.
For David seems to be about a former actor with a superfan stalker and I could have been satisfied with that but a freaky twist spiced it up and gave it even more pizzazz.
Conflagration Desecration is the name of a metal band in search of a drummer. Steve is a drummer who is desperate to join the band. I have a soft spot for rock and roll horror stories and this one did not disappoint. You don't get to rock and roll heaven by dancing with the devil but it's still a hell of a band.
The Price of Fame really impressed me even if I can't relate to wanting the adoration. A man who wants to be famous in his own right also seems to piggy back off someone else's internet followers. Torture ensues.
A few years ago I actually had to look up the meaning YouTube stars and Instagram models. I wondered who are these people and why does anyone care? It did make me glad that I am not competitive. Read my reviews, don't read my reviews, follow me or don't follow me I have no need to be a star, and I feel safer than ever after reading this story to remain a relative nobody!
Reluctant Bloodlust was a satirical look at the zombie genre, it was both gory and amusing.
Thieves are what Ronnie and Carl are aiming to be, but they will come to regret breaking in to an elderly man's home.
Grieving is about a father mourning the loss of his daughter in a most unusual and gruesome way.
Room 405 is the hotel room in which Phillip awakens from one nightmare to find himself in another. Strange chanting in the hall has his wife off to complain to the management but as Phillip dutifully follows along he learns he was better off dreaming.
It looks like 8 out of 10 stories were a big hit with me, and considering how persnickety I can be about my horror that's an impressive number.
I received a complimentary copy for review.
Get a copy
About the author
Morgan K Tanner is a writer, drummer, and golfist currently residing in the English countryside. The idyllic surroundings make it an ideal place to write, drum, and hide the bodies. The busy sound of the typewriter is perfect to drown out the hum of the antiquated torture equipment.When not writing or inflicting pain and suffering on his numerous victims, he indulges himself in all things horror and metal.He is the author of An Army of Skin, The Mind's Plague and Other Bites of Brutality, and The Unbeliever & The Intruder; a Short Sharp Shocks! Book.You can praise or indeed abuse him by visiting www.morganktanner.com or find him on Twitter @morgantanner666 and Instagram @morganktanner.You can also join the mailing list to receive a free story (for starters) http://eepurl.com/dgTmgX
Posted by Well Worth A Read at 11:38 AM No comments: