If She Dies by Erik Therme 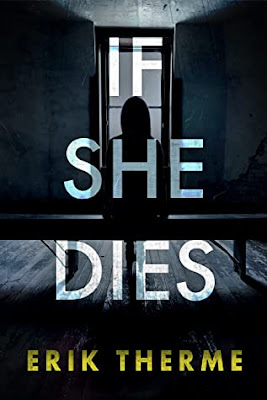 Nine months ago, Tess’s five-year-old daughter was killed in a car accident. The driver, Brady Becker, was sentenced to two years in prison. It didn't make Tess’s pain go away.Brady also has a daughter: A twelve-year-old named Eve who walks to Chandler Middle School every day. Tess knows this because she's been watching Eve for the last three weeks. It isn’t fair that Brady’s daughter gets to live, while Tess’s daughter does not.When Eve goes missing, all eyes turn to Tess, who doesn’t have an alibi. But Tess isn’t guilty.Or so she believes.

As the story opens, Tess has already lost her daughter to a car accident and is on the brink of losing her marriage as well. The grief is all consuming and she can barely function. Her husband has insisted on moving them out of town to a house she can't stand and he believes the change of scenery and a little therapy is going to set her on the path to becoming "old Tess" again.

What he doesn't know is that she stalks and spies on the wife and child of her daughter's killer nearly every day. While she is watching them, someone is watching her! Ominous messages in festive red envelopes have been showing up addressed to Tess that taunt her over her daughter's death. Who would want to torment a grieving mother? On top of all this is some domestic drama with her brother, and the secrets her husband seems to be keeping. This harrowing psychological thriller is loaded with suspense and a roller coaster of emotions. I grieved with Tess for her loss, and all the twists made it impossible for me to know who to trust.

Erik Therme has thrashed in garage bands, inadvertently harbored runaways, and met Darth Vader. When he’s not at his computer, he can be found cheering on his youngest daughter’s volleyball team, or watching horror movies with his oldest. He currently resides in Iowa City, Iowa—one of only twenty-eight places in the world that UNESCO has certified as a City of Literature. Join Erik’s mailing list to be notified of new releases and author giveaways: http://eepurl.com/cD1F8L