The Sound Of Time By Jeremy Essex 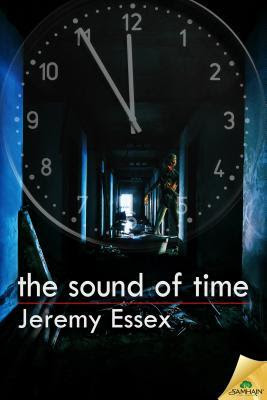 Description
"Is time just an illusion?"

Charles never believed the ghost stories about the old factory. As a psychology student, he understood the spooky tales told by the midnight workers were just the products of overtired minds. But when his company is hired to clear out the derelict old building, a small group of night workers become stranded in the isolated, mist-shrouded complex. Charles decides to conduct a psychological experiment to see if he can re-create the ghostly effects people have seen and heard over the years. But the experiment goes horribly wrong and something inexplicable happens. Now Charles is starting to believe as he finds himself fighting for his sanity and his life."

This was a short horror story that takes place one creepy night in an old factory, There are rumors about people having heard strange noises at night and a disembodied voice that asks "are you real?"
Charles feels that one's perception of time can be manipulated and that would leave them open to see or hear things others would not. Something goes wrong when he tries to test this theory. I did enjoy the start of this story and the creepy atmosphere. The middle became a little too repetitive for my tastes. However the ending was quite good.

I received an advance copy for review.
Posted by Well Worth A Read at 7:53 AM