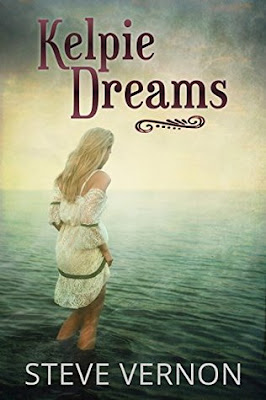 Meet Lady Macbeth - a high school librarian, ex-assassin and part-time kelpie, whose mother wanted to name her Hemorrhoid at birth. Now she has to take on a Sea Hag - eight legs of Godzilla-ugly poured into a bucket full of meanness - with the help of a one-woman army named Rhonda, a 200 year old Sea Captain and a hunky lighthouse keeper who won't admit that he's dead as well. KELPIE DREAMS is a funny, action-packed paranormal romance novel for folks who HATE to read romance novels.


This is probably one of the strangest stories I have ever read. It is weird, bizarre and utterly hilarious.

Lady Cordelia Macbeth who would rather be called Dee, is mourning the loss of her son Hamilton. Hamilton you see had gone for a joyride in a stolen/borrowed vehicle and was killed quicker than you can say gesundheit!
She is so grief stricken that she contemplates suicide and throws herself into the ocean. Of course I realize that is not hilarious at all but luckily there was a pissed off octopus woman at the bottom of the ocean who was able to give Dee the ability to breathe underwater until the mossy brown and green mud horse showed up to take her back to the surface. Not that either of these occurrences were the most shocking things she saw under the ocean but I wouldn't want to give away too much.  Now Dee was not too keen on telling anyone about these escapades, however when the mud horse showed up at her best friend Rhonda's house it kind of spilled the beans.  I will leave you here, because if I told you more you wouldn't believe me anyway. It is probably best that you discover these quirky characters for yourself. I was up all night reading this story.

I received an advance copy of this book through the kindle scout program and was under no obligation to review it.