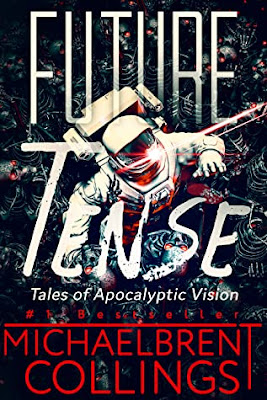 Worldwide bestseller and master of terror Michaelbrent Collings invites you to peer into the future, to uncover things long hidden, and to experience worlds of a Future Tense…A world where suicide is illegal – unless you agree to kill yourself over and over again...A place where childhood games turn back the clock – and bring with them monsters long forgotten...A home where secrets abound – until the killing begins...A reality where a writer's dreams can make her rich – if she's willing to sacrifice the universe...All these, and more: stories of darkness and of light.Stories of despair, and lingering hope.Stories of a future unknown, where ignorance feeds our souls, and where the only hope that remains in a world gone dim… resides in Tales of Apocalyptic Vision!
Future Tense is a sci-fi/horror collection of nine short stories and one novella all set in the future, although not necessarily the distant future.
Not all of the stories were a big hit with me, but the ones that were, totally knocked it out of the park.
Among these were, The Floor Is Lava in which old friends reunite... one final time.
Lucid Dreams, about an agoraphobic woman who starts a new medication regimen and suddenly begins to live a full life even though she still can't leave home, and I Can Do This All Night about a man who often claims it's a woman's world but never meant it or believed it, until now.
In my opinion the author saved the best for last with a twisty psychological thriller novella The Stranger Inside which finds a perfect family in their perfect home as they are about to commemorate the anniversary of a tragic loss. What they don't know is that a stranger has been plotting to interrupt these plans in a most horrific way.
Recommended to anyone who enjoys the unexpected, the unusual, and the downright strange. This is a most entertaining collection.
4 out of 5 stars
I received an advance copy
Get a copy
About the author
Posted by Well Worth A Read at 1:49 PM